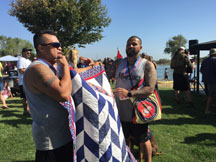 Wow! Where does the time go? Just seems like anymore there isn’t enough time in a day to do it all. Bet you all are thinking the same thing. I can’t keep up with writing it seems, and it isn’t because I don’t have stories. I never run out of those. We have been working hard at finishing our big project for October. We had our issues with Abbey, our Longarm, and got her new motors. We seem to be getting more done now, I hope.

We had two 9/11 Ceremonies this year. Our first one was at Eagle Lakes where they had a mud run. That was pretty interesting but also awesome to see so many not forgetting what this day did to our lives. I played taps for all to honor everyone lost that day. We then honored 5 veterans with Quilts of Honor. All of them had no idea they were receiving a quilt and each were so humble. I gave to one Marine and he said his brother was there, too. He also served in combat so I asked Flo to get the extra quilt, please, and we also presented the brother with a quilt. It was awesome to see them so proud holding their quilts and hugging each other. As I

stood there watching I saw a veteran in the crowd with his hat and I knew he hadn’t received a quilt. So, I asked Flo for another quilt and we presented it to this Marine Vietnam veteran. His face said it all. I’m always so proud to be able to give these veterans some type of healing.

It was a long day as we weren’t done yet. We headed back to Valley Springs to participate in the 9/11 Ceremony with my

veteran brother Lou and his grandson. Love the photo that was in the paper. We are teaching Jordan what honor is all about. We had a beautiful tribute to first responders and all we lost on 9/11. We ended our night eating ice cream—couldn’t forget that.

This past week, as we prepare to leave for Alabama, my Uncle came to visit my folks. Uncle Elmer is my dad’s baby brother. He was in the Army and was not allowed to talk about his service either so it was my time to honor him with his Quilt of Honor. I know he was stunned as he was speechless and for Uncle Elmer, that’s saying something.

This past Friday night I had another honor. I played the ultimate tribute to my sister-in- 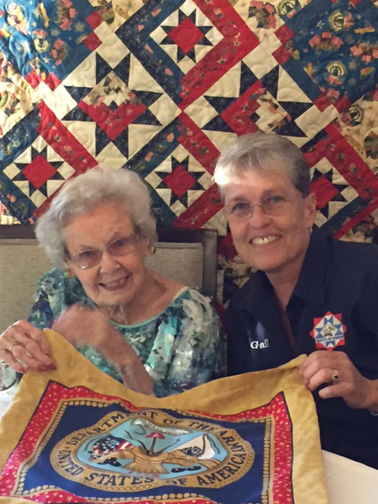 arms, Millie Luck Lewis, WWII Women’s Army Corps Veteran. Millie was an inspiration to so many. She gave with all her being to so many. I was lucky enough to award Millie her Quilt of Honor in 2011 at a ceremony honoring her with her Bronze Star. She never wanted recognition for anything she ever did but she was a hero in so many ways. One of her last contributions was to Quilts of Honor. Millie will always hold a special place in my heart. As I played taps for her in front of her friends and family, I could feel her and see that beautiful smile.

Guess I should have written more during the past months—looks like I gotta book going here but so much to tell.

So this story is one you won’t hear I bet. It’s a one-of-a-kind. So, you know all military members receive dog tags in the military and they become a part of you. Well, I held on to mine all these years. I think I want to get them gold-plated but I was afraid to let them go 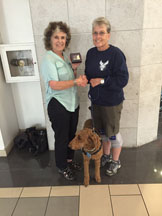 and I especially didn’t want to lose them. Well, I was up in Mendocino, CA and stopped in a shop. The lady was very nice and told me she could do it for me and she wouldn’t lose them and that she had been doing it for 20 years. So I left them in April 2016. About a month later the lady calls me and she is crying and very upset. She tells me they lost my dog tags. Well, I was in shock but all I could say to her was it’s in Gods hands now. Needless to say that was a big loss for me. I just went on with my business and this past week this nice lady calls and says, “Gail, they found your tags.” I was screaming into the phone—I was so happy. I told her not to mail them and that we would pick them up. We met half way and you will see in the picture that both of us are so happy. Those tags went all the way back to Georgia to the mail recovery center and it was her persistence and her friend who found them and got them back. Never lose faith. The story is much longer but, in short, those tags are famous all over northern California and everyone wants to see the tags and me and a happy ending. Best of all, I got them back a week before my 65th birthday and my military band reunion.

Here’s a great picture of Carl at his going away party. We will be waiting for Carl to start his Quilts of Honor group in Ohio. He will be in another state but will remain on our Board and a strong member of the Quilts of Honor family.

I will be at my Military Band Reunion with my 14th Women’s Army Corps Band. We will practice and then put on a full concert for the public in Anniston, Alabama. I am so looking forward to seeing all my sisters the first week in October. So, stay tuned for the Blog as we will be on the road. Debbie, Flo and I will be driving through some of the southern states. (Can you say U-turn?)

October will also bring us two fundraisers – our annual Halloween Bunco on October 22nd and for the first time, a Bocci Tournament in Clayton, CA on October 15th.

I also want to introduce our Quilts of Honor family to a new member of my family. Meet Rue.

I got her in May 2016. She is my service dog and you will be seeing a lot of her. She has been a blessing to me and she has done so good in our training to become my sidekick. Thank you to my veteran brother, Phil, and his wife Linda for helping to train her when I couldn’t and to Silver Paw Ranch for training us and supporting our veterans. (https://www.facebook.com/SilverPawRanch)